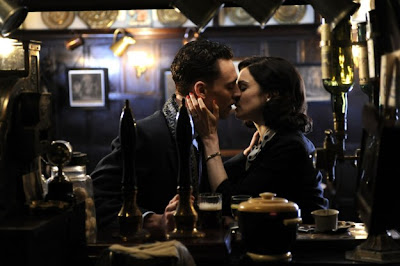 The young wife of an eminent, ageing judge conducts an (oft tortuous) affair with an inconsiderate former Royal Air Force pilot in post-Second World War London, eventually coming to leave him and the comforts of privilege for the younger man and a life of uncertainty and heartache, in this intoxicatingly elegant drama. Davies’s exquisite mise en scène, lit with the eye of an old master by Hoffmeister, proves soul-strokingly beautiful, but the film’s performances are something of a mixed bunch, with Hiddleston’s shouty turn proving particularly disappointing. However, Weisz is fine (if perhaps not quite at her best), though Beale’s turn certainly proves affecting.
-- Iain Stott