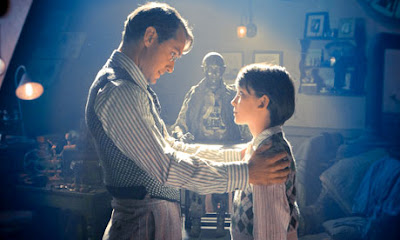 A young orphan, living alone in the walls of a Parisian train station since the disappearance of his drunken uncle, helps bring back to the world’s attention the all-but-forgotten film pioneer Georges Méliès, when he and the former film-maker’s goddaughter become embroiled in a great adventure involving a broken automaton, the man in the moon, and tons of decaying celluloid, in Martin Scorsese’s diverting family film. With a style and tone somewhere between Spielberg and Jeunet, the film will perhaps not satiate the tastes of the more sophisticated cinephilic palate, but an affecting central performance from Butterfield and several likable supporting turns make it worth a watch.
-- Iain Stott