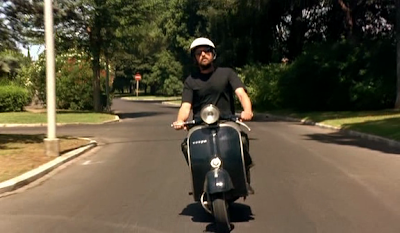 Moretti’s gentle but frequently hilarious autobiographical comedy-drama is divided into three distinct chapters. In the first, In Vespa (On My Vespa), the film-maker traverses the streets of Rome on his scooter, whilst sharing his thoughts and feelings on movies, architecture, and life in general. Isole (Islands) sees him travel to the Aeolian Islands in an attempt to find the peace and quiet required to write his next screenplay. Though, with his television-obsessed friend in tow, he finds only oddballs and distractions. Whilst the final chapter, Medici (Doctors), follows his months-long quest to discover the cause of his nocturnal itching, taking him from dermatologists to allergists to Chinese herbalists and back again, all the while accumulating a mountain of lotions and potions. Though the overall tone is deliciously odd and the plotting eclectic, the three disparate chapters move easily from one to another, giving the piece a strangely unified feeling. Hugely entertaining.
-- Iain Stott