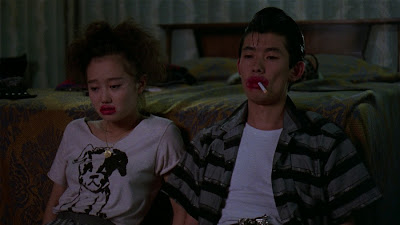 Jarmusch’s laidback comedy consists of three short films, linked by a rundown Memphis hotel, which run in parallel to each other. In Far from Yokohama, two Japanese tourists – one an Elvis nut, the other a Carl Perkins fanatic – visit Sun Studio, consider visiting Graceland, compare their surroundings to Yokohama, and check in to the aforementioned cheap hotel. A Ghost sees a recently widowed Italian woman, in town on an unexpected layover, share a hotel room with a local woman who has just left her common-law husband. However, they are not alone for long. And in the final episode, Lost in Space, a drunken, recently unemployed Englishman, whose common-law wife has just left him, shoots a man whilst robbing a liquor store and hides out with his best friend and brother-in-common-law in the (unbeknownst to him) same seedy hotel as his estranged other half. Excellent production values, charming performances, and unpredictable plotting make this a thoroughly enjoyable film, but it is also a decidedly minor one when compared to Jarmusch’s two previous concoctions.
-- Iain Stott