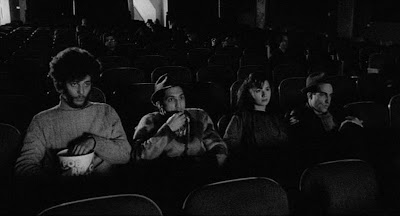 In Jarmusch’s gently funny and quietly affecting comedy-drama, a New York gambler reluctantly puts up his Hungarian cousin for a few days, before she ships off to Ohio to live with their aunt, but gradually comes to enjoy her company. A year later, after big wins at the track and the card table, he and his gambling partner hit the road in a borrowed car to visit her in snowy Cleveland. However, after a few days, wanting neither to overstay their welcome nor return yet to New York, the two of them (plus the girl) bundle into their old banger and head for sunnier climes. Beguilingly relaxed pacing, striking mise en scène, judicious scoring, and some effectively understated (though occasionally full-blooded) performances combine to quite sublime effect.
-- Iain Stott