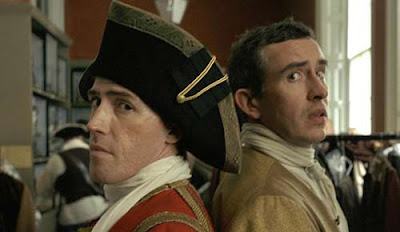 Mixing faux-making-of footage with scenes from the film-within-the-film, Winterbottom’s impeccably crafted comedy documents the difficulties that a film crew has adapting Laurence Sterne’s “unfilmable” novel, The Life and Opinions of Tristram Shandy, Gentleman (1759-1767). Playing both themselves and characters from within the book, Coogan and Brydon both excel, gently and mockingly playing on their public personae. Elsewhere, Macdonald’s quiet turn adds some much needed everyday normality, whilst Harris’s performance embodies every film-geek’s Fassbinder-spouting wet dream (well, for those that like girls anyway). Williams also proves good value as a pedantic period expert overseeing the costumes for the production's big battle scene. And, indeed, all of the performances manage to catch the eye in some way. A thoroughly entertaining work.
-- Iain Stott