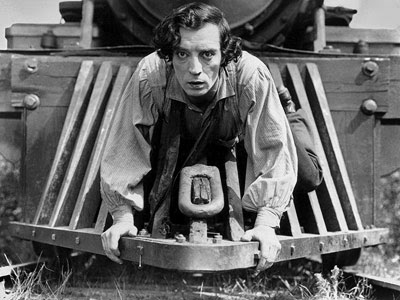 At the behest of his sweetheart at the outbreak of The American Civil War, a locomotive engineer determines to enlist in the Confederate army, but is rejected on account of his reserved occupation. However, his girl doesn’t believe this and refuses to see him again until he is in uniform. A year later, Yankee spies kidnap both her and the other love of his life, his beloved engine. Singlehandedly, he sets out to rescue them both, in this inconsistently entertaining action comedy. The scenes involving Keaton alone on a train are generally quite wonderful – full of spectacular action and great gags. But much of the rest of this (overlong) film, however, is quite tedious.
-- Iain Stott