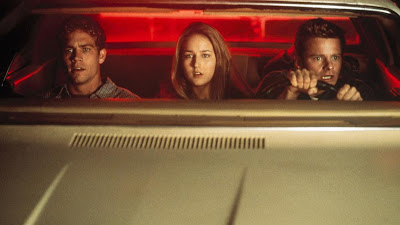 After their cross-country road trip takes a turn for the terrifying following a hopelessly misjudged CB prank, three young people find themselves terrorised by an unbalanced trucker, in Dahl’s entertainingly ridiculous (if never quite ridiculously entertaining) thriller. Though Walker and Sobieski are perhaps a tad bland, Zahn’s performance proves good value, with the distinctively voiced Levine also doing well as the faceless stalker. Dahl’s suspenseful direction also proves noteworthy, though the use of music is occasionally a little distracting, with the general plotting, of course, also being more than a little familiar, not to mention rather preposterous.
-- Iain Stott