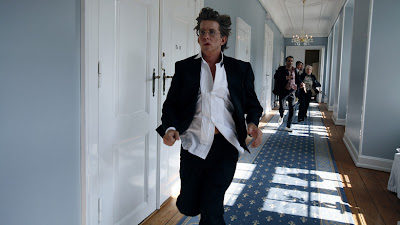 A young man, well on his way towards a life of domestic bliss with his beautiful girlfriend, finds his existence disrupted immeasurably by the discovery of the fact that his father – who his two mothers had told him had committed suicide years earlier – was in fact alive, well, and in town (and a world famous opera singer to boot). To complicate matters further, his childhood sweetheart, whom he still loves immensely, has also returned to his life, leaving him well and truly discombobulated, in Vinterberg’s uncharacteristically light, almost Wes Andersonesque comedy-drama. Charming performances, sensuous direction, outstanding sound design, and unpredictable plotting combine to hugely entertaining effect.
-- Iain Stott