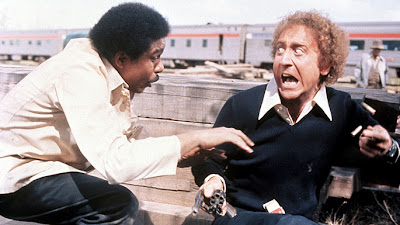 On a cross-country train journey from Los Angeles to Chicago, George Caldwell, a mild mannered publisher from The City of Angels, hits it off with Hilly, an alluring secretary from The Windy City, and heads back to her compartment for a night of passion – an action that will eventually lead to him witnessing several murders, being thrown (more than once) from a moving train, being falsely accused of murder, instigating a jailbreak, teaming up with an unapologetic thief, and even blacking up in order to play hero, after he becomes embroiled with a gang of ruthless art forgers. For the most part, whilst paying homage to Hitchcock’s The Lady Vanishes (1938), this comic thriller proves thoroughly entertaining, with Gene Wilder and Richard Pryor being as excellent as ever and Patrick McGoohan proving equally impressive as the coldest of villains. However, as it gradually morphs from Hitchcockian suspenser to action-adventure, it slowly loses its way somewhat.
-- Iain Stott