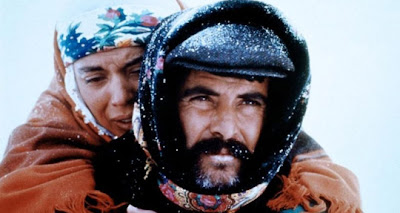 Given a week’s release from their island prison, five Kurdish men return home to put their affairs in order, but find doing so difficult in a country blighted by martial law, creaking tradition, and an obsession with the idea of honour. Made by Gören in proxy for the politically imprisoned Güney, Yol is a film with a decidedly colourful production history, borne out by some of its rougher edges, with the finished result often feeling distractingly episodic and overly polemical. Never the less, alluringly scored with convincing performances and good location work, Yol also proves to be a film of quite some power.
-- Iain Stott