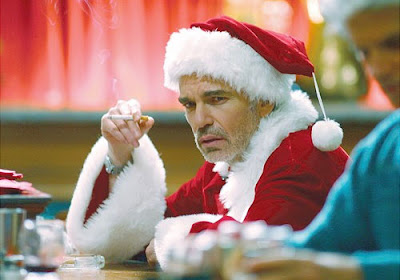 An alcoholic safecracker with vague suicidal tendencies, who each Christmas (along with his dwarfish partner-in-crime) works as a shopping mall Santa Claus in order to rob his employers, forms an unlikely bond with a naïve young child, who, in the absence of his imprisoned father and deceased mother, is being raised alone in their luxurious home by his senile grandmother, when he takes it upon himself to move in with them for duration of the job. The job itself, though, despite his new domestic situation, proves more difficult than usual, complicated as it is by a nervous mall manager and his crooked head of security, who, it turns out, is soon on to them and after a piece of the pie. Whilst the film’s editing and use of music prove unusually witty, it is Glenn Ficarra and John Requa’s brilliant dialogue, brought to life by Billy Bob Thornton’s foul-mouthedly funny central performance, that truly drives this hugely entertaining seasonal comedy, which more than earns its somewhat incongruous, upbeat ending.
-- Iain Stott