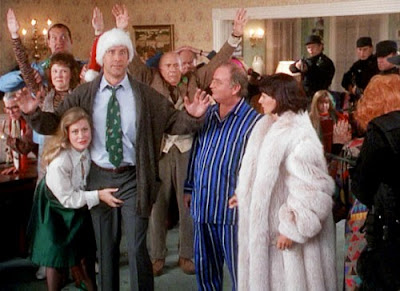 Clark W. Griswold’s hopes for a happy family festive period are complicated somewhat by misbehaving Christmas lights, uninvited guests, a dangerously flammable tree, stuck-up neighbours, a rodent interloper, and a missing bonus cheque, in this oft hilarious seasonal offering. Although its comedy is decidedly low-brow, there are very few, if any, films that manage to capture quite so well the spirit of a warm, chaotic family Christmas as this does. However, its neatly resolved ending feels somewhat unearned, and a few of its gags fall flat. But any film that features Mae Questel – of Betty Boop and Olive Oyl fame, appearing on screen for the final time in her long, joyful career – has got to be worthy of the attention of even the most slapstick-averse curmudgeon. (Well, it wouldn't do them any harm, anyway.)
-- Iain Stott