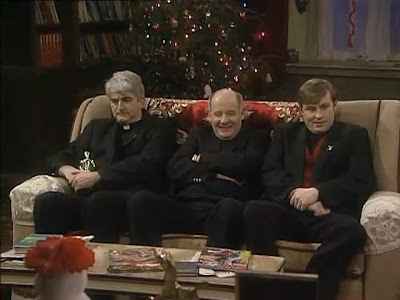 When eight priests find themselves stranded in Ireland’s biggest lingerie department in the run up to Christmas, Father Ted Crilly, of Craggy Island Parochial House, takes it upon himself to lead them all to safety – which he does with aplomb, earning himself a prestigious Golden Cleric Award in the process. Though hoping that it will bring him fame and fortune, the award instead attracts only the attentions of a strange priest from the mainland, who claims to be an old friend of his from their seminary days, but is really just a thieving chancer. Though it contains a number of inspired gags and is consistently entertaining throughout, this Father Ted Christmas special doesn’t quite match up with the best of the series. Dermot Morgan and Ardal O'Hanlon are, of course, great, and the its irreverence often proves intoxicating, but at twice the length of a regular episode, the pacing just never feels quite right.
-- Iain Stott