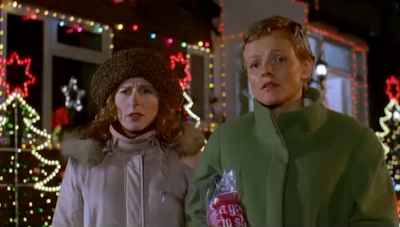 When a number of work disagreements sees them fall out, two lifelong friends from the North East develop an obsessive Christmas light one-upmanship rivalry, which transforms their neighbouring suburban homes to such an extent that even Clark W. Griswold would turn up his nose, leaving their wives, a pair of Mancunian sisters, to look on in disgust. However, as the third Christmas of their feud approaches, a piece of bad news manages to put everything in to perspective, in this diverting seasonal comedy. Robson Green and Mark Benton excel as the bickering brothers-in-law, but Nicola Stephenson and Maxine Peake, as their long-suffering wives, struggle to make anything of their underdeveloped roles.
-- Iain Stott