Clash of the Santas 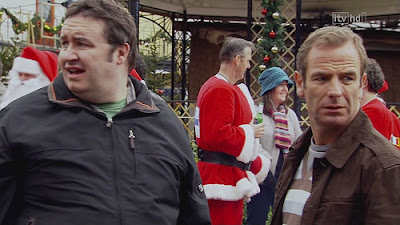 When Howie agrees to represent England at the Santa World Championships, he and his best pal Colin find themselves spending the run-up to Christmas in Lithuania. However, with Howie having recently split from his cheating wife, leaving him somewhat down, he approaches the competition rather half-heartedly. And with Colin being both very patriotic and a great Santa-lover, it’s not long before the bickering pair are back at each other’s throats once more. Never the less, the distracting presence of philandering Welshmen, boastful Aussies, acrobatic Japanese, and explosive Germans ensures that their rivalry doesn’t get completely out  of hand, in this hugely disappointing follow-up to Christmas Lights (2004), Northern Lights (2006), & City Lights (2007). Even the considerable comic talents of Robson Green and Mark Benton can’t save this ridiculous venture. Ludicrous plotting, naïve characterisation, and a number of half-hearted performances combine to decidedly poor effect.
-- Iain Stott