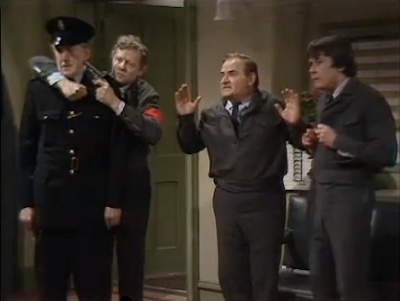 Caught fermenting illicit Christmas gut-rot, Fletch and Godber find themselves brought before the prison governor for admonishment. Or, at least they would have done if he hadn’t’ve eaten some of Godber’s less than stellar Christmas pud, which has left him a virtual prisoner in the officers’ latrines. Instead, they find themselves taken hostage by a deranged trustee who, in the absence of the governor (his real target), has captured them, Mr Barrowclough, and the governor’s secretary at gunpoint, all in the misguided hope of negotiating his escape. However, Fletch, wanting to bring about a swift resolution to the situation, but without finding himself on the wrong side of the us & them status quo, attempts to find a peaceful, ethical resolution. Typically dexterous performances, top-notch comic writing, and some inspired gags combine to generally hilarious effect, in this extended Porridge Christmas special.
-- Iain Stott