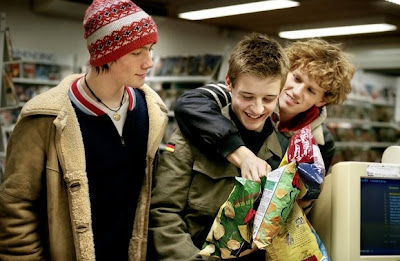 Rais-Nordentoft’s diverting small town, coming-of-age drama depicts a few weeks in the life of an ordinary teenaged boy as he divides his time between playing football, going to school, masturbating, getting drunk, breaking and entering, and trying to get into the knickers of a pretty classmate, whilst not quite fending off the attentions of a friend’s Lolita-like little sister. Filled with hormonal teens, prone to grand emotions and erratic behaviour, Kick'n Rush often feels painfully authentic. However, its adult characters are considerably less well drawn, and as such fail to give the film a mature core upon which to hang its adolescent goings-on. Never the less, despite ample scope to do so, the fact that no one grows, no one changes, and no one learns any lessons proves rather refreshing.
-- Iain Stott