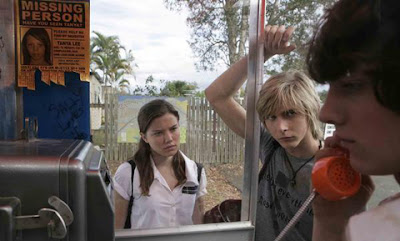 After one of them witnesses a man (Joel Edgerton) burying something in the woods, three teenaged school friends (Sebastian Gregory, Hanna Mangan-Lawrence, & Joshua Payne) decide to investigate the site, believing that they might discover the body of a missing 15-year-old girl (Holly Baldwin), but instead come across the murdered remains of a Canadian backpacker. However, rather than report the incident to the police, they decide instead to blackmail the killer, demanding that he murder the local child molester (Michael Dorman) who had raped two of them years earlier. Needless to say, things don’t go exactly to plan in Hewitt’s stylish and unpredictable, but not always entirely logical thriller. Well-crafted with fair performances and some nice twists, the film is nevertheless let down somewhat by its logistically unconvincing plotting.
-- Iain Stott