The Ghost of St. Michael's 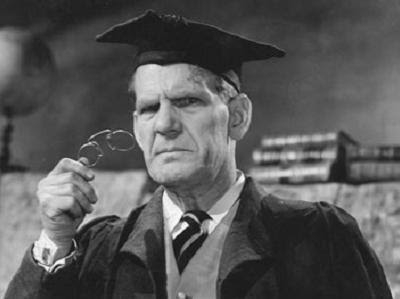 With Varnel directing yet another screenplay loosely based upon/ripping off Arnold Ridley's The Ghost Train (1923), and with Claude Hulbert and Charles Hawtrey making almost a straight swap for Moore Marriot and Graham Moffat, Hay’s first Ealing film proved not a massive departure from his previous fare. In it he plays William Lamb, an incompetent school master, long out of work, who, thanks to a war-related dearth of capable teachers, finds himself hired by St. Michael’s College, a prestigious school recently billeted upon the Isle of Skye. However, when the school's headmaster and, subsequently, his replacement die in suspicious (vaguely spooky) circumstances, the finger of suspicion points Lamb’s way. Consequently, aided by an impossibly posh colleague (the new default headmaster, and presumed next victim) and a know-it-all pupil, he sets about uncovering the truth. Hay is as great as ever, and Hulbert and Hawtrey make a fair stab of replacing Marriot and Moffat, with John Laurie's cameo as a dour Scots caretaker also proving memorable, but the film lacks the magic of the best of his Gainsborough output. Consistently entertaining, never the less.
-- Iain Stott