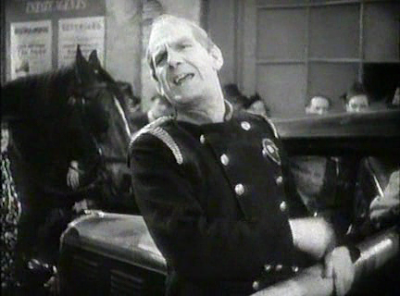 With their abysmal record all too evident, and the threat of being closed down a definite possibility, three members of a small town fire house find themselves forced to confront their many and varied failings. And so, after a trip to London to witness the workings of a busy, up-to-date fire department, they set about modernising their own decidedly decrepit one. However, applying their typical know-how to the task, their alterations do naught but reduce efficiency. Never the less, an opportunity to make a little money on the side arises when an American film crew looks to hire their horse-drawn engine for a new production. The trouble is they’re not really movie producers, but a gang of crooks looking to use their cart to get into The Tower of London in order to rob The Crown Jewels. With the emphasis switched from intricate word play to slapstick, Where's That Fire? proves an atypical Will Hay vehicle. Never the less, it’s often very, very funny. An extended physical sequence in which Hay, Moore Marriott, and Graham Moffatt attempt to erect a fireman’s pole, but succeed only in causing untold damage to their neighbours’ cars, shop fronts, and homes, bringing the town to a standstill in the process, is amongst the very best of the great British comedian’s oeuvre. And of course, the performances (including a memorable cameo from a very young Charles Hawtrey) prove tremendously skilled.
-- Iain Stott