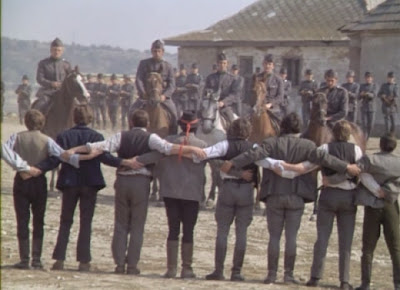 Much like his earlier, better known The Red and the White (1967), Jancsó here rejects traditional editing techniques to tell his story of revolting farm labourers in late 19th century Hungary in long, sweeping, time-defying takes. When one piece of narrative reaches its natural conclusion, instead of cutting to the next to indicate a passing of time, director of photography Kende’s always roving camera merely pans to the next incident, with sometimes days or perhaps even weeks passing, without any cuts, in a matter of mere minutes. Dialogue is also kept to a minimum, with the dance-like visual storytelling, aided by a number of renditions of old workers' songs, driving what there is of a narrative. The cast, much like the socialist peasants it portrays, is well organised and acts as one, with no single member proving more important than another. And though it never quite proves as powerful or memorable as the aforementioned The Red and the White (1967), the results are often quite dazzling, like an earthy musical with added Marxist dogma and overt symbolism. Essential viewing.
-- Iain Stott