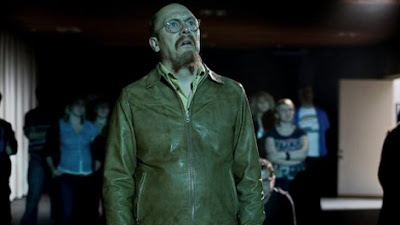 Just released from prison, and with nowhere else to go, Georg (Gnarr) manages to convince Daníel (Ragnarsson) to allow him to stay with him for a while. And with Ólafur (Sigfússon) already staying there, it soon becomes something of a work/prison mates reunion. However, Georg’s time in stir hasn’t really changed him, as he is soon (predictably) trying to impose his will on to all those around him. But as he endeavours to reassess his life and reconnect with his hard-hearted mother (Jóhannsdóttir, and in flashback Erlendsdóttir), he comes to realise that everything he has come to know has been built on lies, and consequently sets about the seemingly impossible task of making a fresh start. It’s all change for Ólafur, as well, as the perennial loser suddenly finds a little bit of success and happiness, when he lucks into a radio DJing job. Daníel, however, who has secretly been studying art rather than medicine, is as anxiety-ridden and miserable as ever, as he struggles to pluck up the courage to confess to his wife and parents of his secret double life. Eventually, and against all the odds, after their various misfortunes on The Night Shift, The Day Shift, and The Prison Shift, everything begins to come together for the mismatched trio, in Bragason’s frequently hilarious and surprisingly affecting film, which miraculously (and decidedly pleasingly) manages to find a satisfactory conclusion to the stories of Georg, Ólafur, and Daníel without betraying all that had come before.