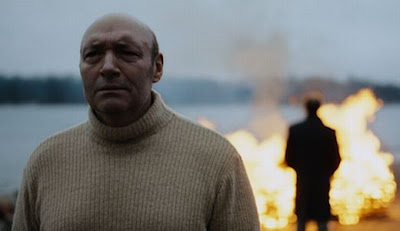 Aist (Sergeev), a middle-aged unmarried factory worker from a region of central Russia that still shows traces of pre-Slavic Merjan culture, narrates for us the journey that he takes with his friend Miron (Tsurilo), when said friend’s young wife, Tanya (Aug), passes away. Observing ancient Merjan customs, the two take to the road with her freshly washed body and a pair of caged bunting birds, heading towards the site of their riverside honeymoon spot to prepare her funeral pyre. Along the way, again according to custom, Miron regales our narrator with tales of their sexual history and other intimate details, such as his habit of gently washing her from head to toe in vodka, an act strikingly captured in flashback. Aist also diverts us with Merjan-tinted, father-centred memories from his own childhood, again beautifully shown in flashback. The funeral act itself, like much of the film, is captured almost wordlessly and shown in painstaking yet strangely sensual and affecting detail, benefiting greatly from Krichman’s stylish (though never flashy) photography and Karasyov’s outstanding and decidedly eerie score, punctured occasionally by Aist’s particularly and increasingly melancholy musings. The ending, which the viewer if they’ve been paying attention should really have seen coming, has had a tendency to split audiences, but I find it hard to imagine the film coming to a close in any other way. Excellent.
-- Iain Stott