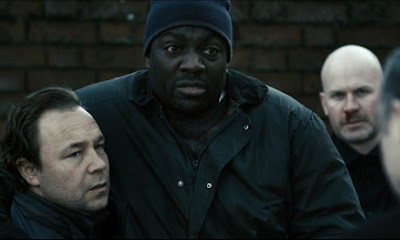 In Blair’s diverting crime drama, a small-time criminal, in debt to a local gangster, finds himself forced to coerce his slow-witted gentle giant of a flatmate into a series of illegal cage fights, in order to save his own skin. But, unable to cope with the stress and guilt that he subsequently feels, sees his drink and drug use escalate to dangerous levels. However, romance unexpectedly enters both of their lives, giving them a brief glimmer of hope for a better future. Though generally well crafted, this film, inspired by John Steinbeck's Of Mice and Men (1937), never really feels entirely convincing (and at times feels more than a little clichéd), but the fine performances of Graham and, in particular, Akinnuoye-Agbaje more than hold the attention throughout.
-- Iain Stott