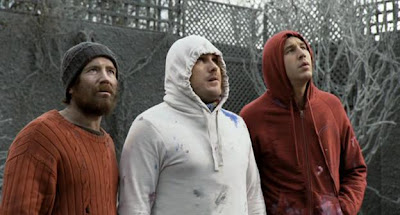 With a trio of amusing and well delivered performances, a witty and deceptively intelligent script, and some budget-belyingly excellent production values, Carrivick’s intricately plotted piece of science-fiction, his sole feature film credit, proves itself to be a thoroughly entertaining little film. After being fired from his job at the local theme park, Ray (O’Dowd, very funny), a comic book nerd with a passion for time travel, decamps to his local pub with two friends – one a fellow “imagineer”, the other a more earthy type – to drown his sorrows. Before long, however, after stumbling across a tear in the space-time continuum in the gents’ toilets, they find themselves traversing through time, bumping into fellow time travellers (both beautiful and nefarious), whilst doing their best to avoid their own future and past selves, as they attempt to return to their own time without doing too much damage – all without ever leaving the confines of The White Horse.
-- Iain Stott