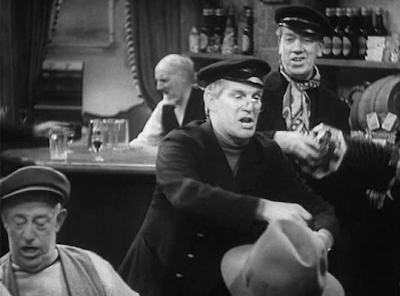 Captain Ben Cutlet, a harmless crank who, despite never having been to sea a day in his life, likes nothing better than to regale patrons of his sister’s pub with tales of his seagoing adventures (in exchange for free beer), suddenly finds himself on the open waves when a local shipping company, looking to find a sap to inadvertently help scuttle an unseaworthy craft for the insurance money, enlists his non-existent captaining skills for a trip to Jamaica. In their first appearance as a trio, Hay, Marriott, and Moffatt do well together, with some of their verbal sparring proving inspired, but the film generally feels rather drawn out and even a tad tedious at times. Worth a watch, never the less.
-- Iain Stott