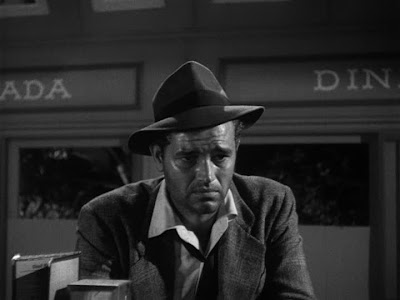 A low-rent nightclub pianist, whilst hitchhiking from New York to Los Angeles to see his girl, accidentally kills a loud-mouthed bookie, and takes on his identity in order to avoid an inevitable trip to the gas chamber. Unfortunately, a fellow hitchhiker is soon on to him, who proceeds to hold him to ransom, in Ulmer’s short’n’sour and decidedly bleak little noir. Neal does well in the central role, whilst Savage excels as a sexily deranged femme fatale. The high contrast black and white photography, despite an awful lot of back projection, also catches the eye.
-- Iain Stott