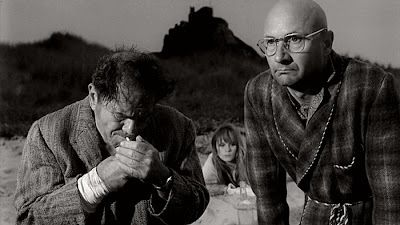 As they await rescue, a wounded gangster and his gravely injured partner seek shelter in a castle on a remote Northumberland island, forcing at gunpoint an offer of hospitality from its owners – a painfully meek retiree and his young French trophy bride. However, things, of course, go anything but to plan, as the only visitors to the island prove unwanted ones, in Polanski’s oft hilarious and decidedly discomfiting black comedy, which features a pair of excellent performances from wonderful Pleasence and Stander.
-- Iain Stott