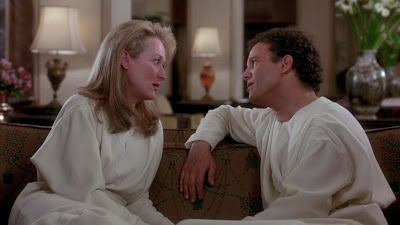 When a wisecracking advertising agent crashes his brand new convertible in to an oncoming bus, he suddenly finds himself transported to Judgment City, a strangely familiar utopia where the recently deceased find themselves forced to defend their lives against charges of cowardice – the penalty for which being (rather than a pass to the next world) their forced return to Earth as a new-born child. Unfortunately, our hero has not always been the bravest, and so is not particularly optimistic about his chances. And to make matters worse, he has just met the woman of his dreams, a fellow defendant whose next port of call is very unlikely to be Earth, making the verdict of his case all the more important. With excellent performances from the pathos-dripping Brooks and the ethereal Meryl Streep, this gentle romantic comic fantasy proves quietly intoxicating, if perhaps somewhat unambitious, with the film’s immense satirical potential left, for the most part, untapped.
-- Iain Stott