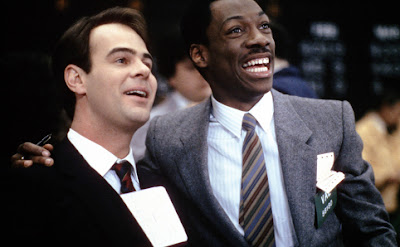 When two ageing brothers, the owners of a major New York commodities brokerage, find themselves on the opposite sides of the nature versus nurture debate, a dastardly wager is proposed, in which they contrive to have a well-bred employee of theirs swap places with a common street hustler in order to see whether it is environment or genetics that dictates  behaviour. However, when the two discover the reason for their sudden changes in fortune, they band together (along with a fiscally-aware prostitute and a loyal butler) to gain vengeance upon the heartless pair by contriving to bring down financial ruin upon them, in Landis’s oft hilarious but somewhat erratic satirical comedy. Fine performances and excellent dialogue delight throughout, but an extended sequence on a train, which betrays the style and tone  of all that came before it, detracts from the overall effect somewhat.
-- Iain Stott