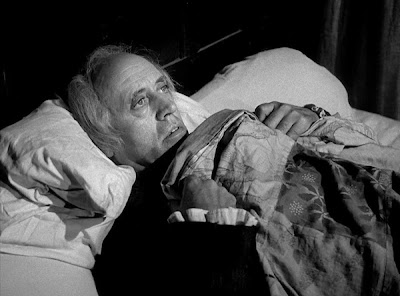 Director Hurst and photographer C. Pennington-Richards contrive to produce some decidedly potent imagery, against which the ever wonderful Sim gives a thesping tour de force, bringing wonderful life to Dickens’s much-filmed perennial favourite, A Christmas Carol (1843), in which a work-obsessed old miser finds himself visited on Christmas Eve by three spirits, who proceed to show him the error of his ways. The three ghostly figures guide him through Christmases past, present, and future, from before the point at which cynicism had consumed him, through his development from loving young man to parsimonious penny-pincher, to his ultimate demise, illustrating in painful detail the ways in which his heartless behaviour has affected those around him. Though overly melodramatic in some spots and a tad sentimental in others, this beautifully crafted seasonal fantasy proves thoroughly entertaining throughout.
-- Iain Stott