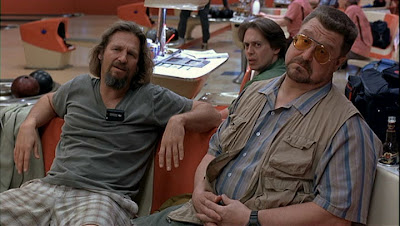 When a pornographer’s hired thugs leave him with a urine-stained rug after mistaking him for his millionaire namesake, Jeff “The Dude” Lebowski goes off in search of reparations. Instead, however, he finds himself at the centre of a million dollar ransom plot, when the big Lebowski’s trophy bride is (or perhaps isn’t) kidnapped. Aided by his ‘nam-obsessed ten pin bowling teammate, Walter, he strives to find out who did what to whom and why, as things become ever more complicated and farcical. Pleasingly convoluted plotting, wonderful comic performances, and instantly quotable dialogue combine to decidedly hilarious yet deceptively thoughtful effect, in the Coens’ allegorical comic masterpiece.
-- Iain Stott